RCU Hetauda: Orientation to LDOs and EOs on Management and Operation of Local Governance organized 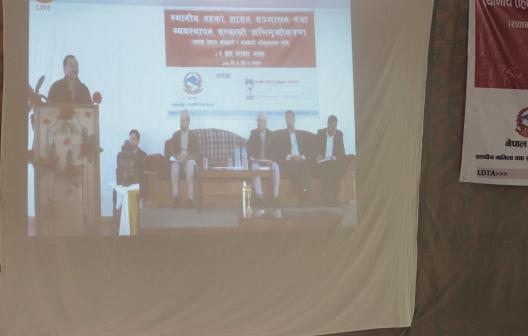 Ministry of Federal Affairs and Local Development (MoFALD) in association with Local Development Training Academy (LDTA) and in coordination with Local Governance and Community Development Programme (LGCDP II) organized a three day orientation on Management and Operation of Local Governance from 28 to 30 March 2017 in different parts of seven provinces of the country. The aim of the orientation was to update Local Development Officers (LDOs) and Executive Officers (EOs) of Municipalities and Rural Municipalities about the role of LDOs and EOs in managing the transition of local political units in the changed context. The orientation was focused on immediate actions to be taken by the local political units and the role of LDOs and EOs after the enactment of Local Governance Operation Order 2017 and implementation of the report of Local-level Restructuring Commission—particularly, in managing human resources, finance, infrastructure development, social security and e-governance, social development and planning, among others—in the transition period. The orientation was organized at all seven provinces of the country. It was inaugurated by Hon’ble Mr. Kamal Thapa, Deputy Prime-minister and Minister of Federal Affairs and Local Development (MoFALD) at Nagarkot, province 3. Similarly, the the event was concluded by Mr. Kedar Bahadur Adhikari, Secretary, MoFALD at Biratnagar, province 1. The inaugural and closing sessions were webcast through YouTube channel at all orientations in provinces.

The orientation for Province 2 was organized in Bardibas, Mahottari, in coordination with Hetauda Regional Coordination Unit (RCU) of LGCDP II. LDOs from Bara, Parsha, Rautahat, Mahottari, Dhanusha and Siraha, and EOs of Municipalities and Rural Municipalities of those districts attended the programme. The inaugural session was chaired by Mr. Jeevan Kumar Shrestha, Joint Secretary, MoFALD and closing session was chaired by Mr. Yubaraj Poudel, LDO, Mahottari. After the closing session, participants visited the Mushahar settlement—situated in Bardibas Municipality Ward No 1—being constructed by Dhurmus-Suntali Foundation and interacted with the comedian duo Sitaram Kattel and Kunjana Ghimire.  Dhurmus-Suntali Foundation is the charity organization established by Mr. Kattel and Ms. Ghimire. The foundation is making fifty environment friendly houses for Mushahar community where they saw its miserable economic and sanitation condition during the National Sanitation Campaign that was organized along East-West Highway from 24 to 31 December 2016 in support of MoFALD.